The country is called Lesotho, the language is Sesotho, an individual is a Mosotho and the people are Basotho.

Maps of the World

What do people do for fun in Lesotho?

Kids in Lesotho make their own fun by playing games together. They love to play group games and sing and dance with each other. Many people in Lesotho like to listen to R&B music as well as traditional Basotho music. People like to watch movies when they have a chance to. Women often cook together and make crafts together while they socialize. Many people in Lesotho love football/soccer, so they spend a lot of time watching and playing soccer matches.

Do the Basotho have a religion?

What do people in Lesotho eat?

Almost every school and family has a vegetable garden. In good times with lots of rain (as long as there are no floods), they can feed themselves with their harvest. However the grandmothers with small orphans can find planting and harvesting difficult. When there is drought, the soil is like dust and things do not grow well. They eat steamed bread, potatoes, rice, porridge, and a dish called “papa”, which is similar to mashed potatoes but made of corn meal. (To make your own “papa”, add cornmeal to boiling water and cook until the water is absorbed and starts to firm up (another 5-10 minutes); stir occasionally.) The average person has watery porridge in the morning with a piece of steamed bread. At lunch and supper, there is usually papa and steamed cabbage or spinach. Sometimes there is a soup drizzled on the papa to give it flavour. The cabbage or spinach is cut up in small pieces and cooked. Sometimes there is mashed pumpkin and apples. Children eat “fat cakes”, which are flour fried in fat, like a doughnut without a glaze. Like here, what they eat depends largely on how poor they are. If they can afford it, families buy meat. This means that the diet is Lesotho is primarily starch and fat, with very little protein.

Most people in the towns live in one or two room houses made of concrete blocks with tin roofs and stones on the roof to hold down the tin. In the rural and mountain areas people live in huts called rondavels. Most are made of stone and mud with thatch (grass) roofs. The huts are round and many have a shelf around the inside edge for pots and dishes. For those who have them, sleeping mats are laid out during the night and are rolled up during the day. There is often a small fire for cooking in the middle of the hut. Some people have beds. Entire families live in these one-room rondavels so every inch of space has a purpose. There are also rectangular concrete homes that some families can afford. A curtain divides the house in two. One side is a bedroom; the other side is the kitchen.Most people in the countryside do not have electricity. People who have more money live in bigger homes with many rooms, but even these homes rarely have heat or insulation.

How do the people keep warm?

The Basotho traditionally wrap themselves in brightly coloured blankets. Most people do not have any heating in their homes, and many do not have coats and so the cold temperatures are difficult to cope with. Women wear the blankets around their waists to cover their skirts and keep their legs warm, while men wrap the blankets around their shoulders and fasten them with large pins. Many people have a lot of holes in their blankets, so many cannot keep warm.

Is there snow in the winter?

Yes, there is snow on the mountains; the higher you go, the more snow there is. In the lowlands there is little or no snow, but it is still very cold.

Lesotho is in the Southern hemisphere, which means that they have summer from December – March and winter from June –September. The summer hot and there can be flood-causing rains, while the winter is very cold.

Do people in Lesotho speak English?

Yes, many do. The language of the Basotho (what the people of Lesotho are called) is Sesotho. English is the language of education in Lesotho and so the more education someone has, the more likely they are to speak-English. They rarely have the opportunity to write or speak to English-speaking people. 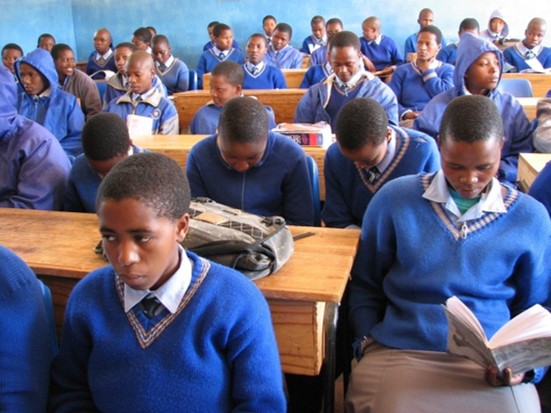