How Keyhole Gardens Are Helping the Battle Against HIV/AIDS

Grandmothers are the key support structure for children in Lesotho and are essential to their survival. Many of them have lost their own children and family members to HIV/AIDS, leaving them confused, lonely and grief-stricken.

Despite their own poverty, illnesses and hopelessness, grandmothers have opened their homes and hearts to Lesotho’s orphaned children, filling the role of parents and guardians. They have the burden and the unique opportunity to support their grandchildren to become educated young leaders.

One such grandmother (‘nkhono’), Nkhono ‘Mafese’s life has been a series of tragedies. She became a widower after 20 years of marriage when her husband contracted Tuberculosis from working in South African mines and died suddenly. She was left to raise 6 children on her own.

Nkhono ‘Mafese had to face a parent’s worst nightmare many times over when four of her six children passed away. She is now left with two daughters, one who lives with her due to illness. The 71-year-old grandmother also has seven grandchildren, two of whom live with her: 11-year-old Itumeleng, and 7-year-old Pulane. Pulane has several disabilities, but ‘Mafese does not have enough money to bring her to the doctor.

Unfortunately, Nkhono ‘Mafese is HIV-positive. She is taking antiretroviral (ARV) treatment, but she experiences negative side effects from the medication which makes her very ill (dizzy spells, back pain, and foot pain). These effects stem from her poor nutrition: she struggles to afford the necessary amount of nutritious food needed to properly digest ARVs.

Nkhono ‘Mafese’s days are typical of a grandmother in Lesotho. She wakes up at 5:00am to get her two grandchildren ready for school. She normally has her breakfast at 10:00am which generally consists of Pap (maize and water paste) and Moroho (green vegetables). That is the only meal she will have that day. After breakfast, ‘Mafese goes to collect firewood or works in her garden. She collects water from the well which is a one hour walk from her hut. Her day ends at 7:00 pm when she climbs into her old bed with her youngest grandchild.

Nkhono ‘Mafese has many worries. She gets depressed thinking about herself and one of her daughters living with HIV. Without adequate food, the ARVs are just making them sicker. She is also very worried about her granddaughter’s disabilities and wonders what will happen to the child when she grows up.

Despite all her challenges, ‘Mafese still finds joy in her life. It makes her happy to see her grandchildren growing up, and she feels very blessed to have been selected to be part of Help Lesotho’s Grandmother Support Program.

Since becoming part of the program, Nkhono ‘Mafese is now able to provide food for her family with the keyhole garden she planted. 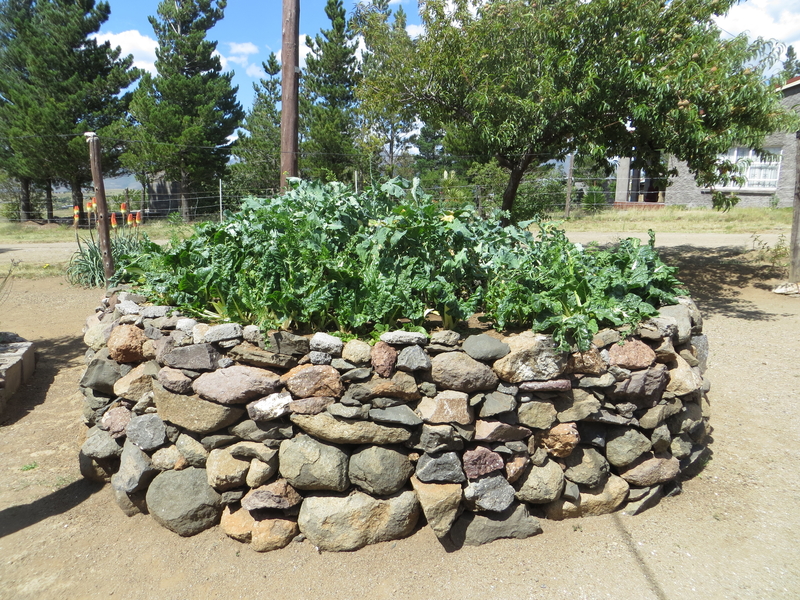 In Lesotho, where almost 25% of people have HIV/AIDS, it is especially important that grandmothers are able to grow vegetables to keep themselves and their orphaned grandchildren healthy (especially if they are HIV+ and require nutritious food to help digest their ARV medication). Because seeds and garden tools are very expensive, keyhole gardens are a sustainable, inexpensive solution to feeding these rural families.

Keyhole gardens allow frail and/or disabled grandmothers to easily access their crops. The garden is sustainable and self-fertilizing – it uses garden waste as fuel to grow vegetables.

Help Lesotho has helped thousands of grannies build keyhole gardens and plant vegetables such as squash, pumpkin, moroho (spinach), beets, carrots and swiss chard to feed their families nutritious meals, not just maize and water. Grannies often have a surplus produce which the can sell to their neighbours to generate income for their families.

This World Health Day, consider sponsoring a grandmother in Lesotho, so she can get the nutrition she needs for her and her family, and so much more!

Grandmothers in Help Lesotho’s Grandmother Support Program attend monthly trainings on topics including: children’s rights, communication, conflict resolution, sexual violence against children, drugs and alcohol abuse, elderly rights, Prevention of Mother to Child Transmission (PMTCT), grief and loss, and anger management. Each grandmother belongs to a support group in their respective village, where they meet once a week to discuss their struggles, challenges, successes and plan income generating projects.